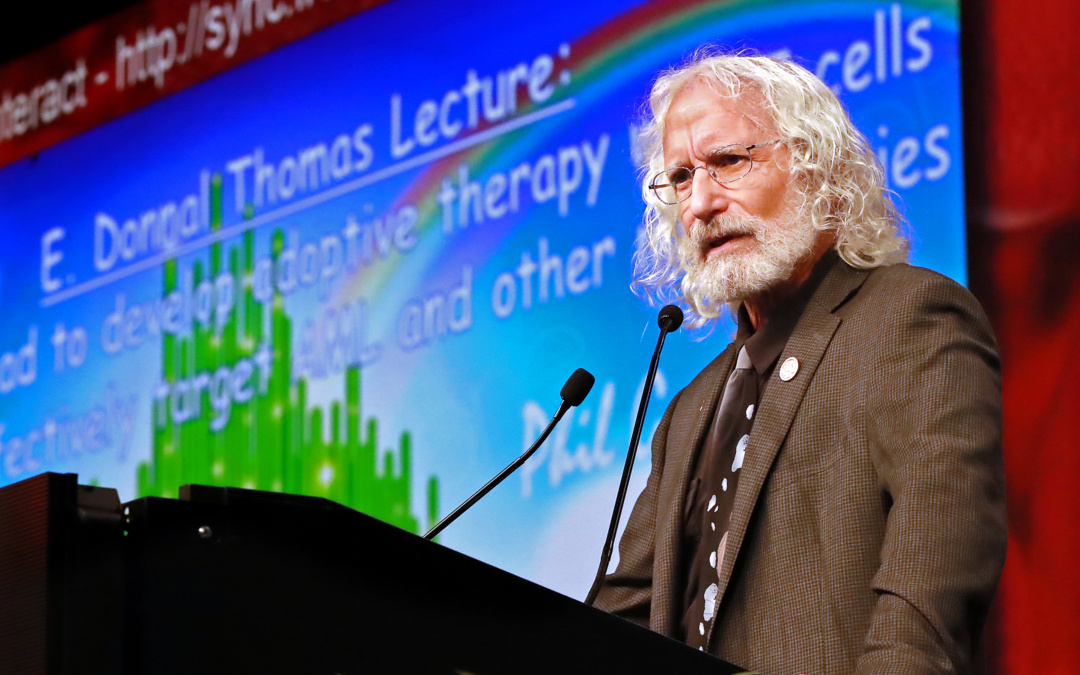 When Philip Greenberg, MD, was interviewed by Dr. Donnall Thomas, Nobel Prize laureate and past ASH President, for a position at Fred Hutchinson Cancer Research Center in the 1970s, he pitched what was then a zany idea. “I told him that bone marrow transplants were much too toxic, and I think I can replace it with antigen-specific T cells,” Dr. Greenberg recalled telling his mentor.

Fortunately, Dr. Thomas supported the vision. Such was the start of Dr. Greenberg’s self-described “long road” to developing adoptive T cells to treat acute myeloid leukemia (AML). His accomplishments over the past four decades have now earned him the E. Donnall Thomas Lecture and Prize, named after his mentor and intended to recognize pioneering discoveries and paradigm shifts in hematology.

Of course bone marrow (BM) transplants are not gone, as Dr. Greenberg acknowledged at the start of his lecture on Monday morning. Yet today, we are much closer to using T-cell therapy to treat AML. “It has been a long road, and it’s been bumpy,” he said. He attributed many of his research successes to his collaborative group. “A career in science doesn’t just happen. It takes a village,” he stated, recognizing the value of “recruiting smart people and giving them freedom in the lab” as a strategy for research innovation.

Dr. Greenberg is known for his contributions to the development of T-cell adoptive immune therapy — isolating T cells in the laboratory, multiplying them, and targeting them to a disease. His work began in animal models and then advanced to treating patients with viral infections.

Now, he uses this approach to target AML and solid tumors in clinical trials in humans.

In Monday’s lecture, Dr. Greenberg wove a scientific narrative that began with identifying target proteins on AML cells. The researchers did this by using molecular analysis to compare gene expression by leukemia cells to hematopoietic stem cells and other normal cells. Next, the group isolated and expanded T-cell receptors that had high affinity for these targets.

In early experiments in humans, the researchers treated patients prophylactically. Choosing a population at high risk of relapsing after BM transplantation, they found that infusing the T cells prevented 12 patients from relapsing even five years later compared to controls. This suggested to Dr. Greenberg that post-transplant adoptive T cells could be effective for maintaining remission in high-risk patients.

These investigations also included a treatment arm. Dr. Greenberg and colleagues found that in this arm, despite the T cells showing anti-leukemia activity, some patients still relapsed early. Why? Dr. Greenberg demonstrated why obtaining high dimensional data from single cell genomics was key to learning what worked and what did not in these studies. One major obstacle, he said, occurred when the T cells didn’t survive and were found to have lost proteins associated with T cell activation. Moreover, leukemia cells at time of relapse had lost certain targets, believed to represent escape mechanisms.

What does the future entail? Dr. Greenberg concluded his lecture by discussing the importance of selecting high-affinity T cell receptors and maintaining T cell persistence. One idea for enabling T cell survival is recruiting helper T cells that could be engineered to recognize the same target. Another strategy is engineering out the mechanism used to promote T cell death and replacing it with more robust costimulatory signals.

In addition to being the recipient of the E. Donnall Thomas Prize, Dr. Greenberg is the head of the Program of Immunology at Fred Hutchinson Cancer Research Center and a professor of medicine and immunology at the University of Washington. He won the 2011 Cancer Research Institute’s William B. Coley Award for distinguished research in tumor clinical trial of immunology and was elected in 2019 as a fellow of the American Association of Cancer Research and as a distinguished fellow of the American Association of Immunologists. His work has been published in Blood, New England Journal of Medicine, Science, Nature Medicine, and Nature Communications.

With Dr. Greenberg’s work on adoptive T cells spanning 40 years, it has been a long road indeed. But for the patients with AML we are privileged to serve, promising therapies like these are well worth the wait.