AML-ing While Black: Race, AML and Survival Discrepancies in America 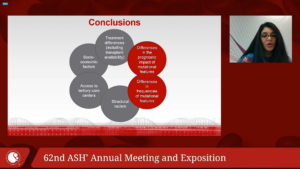 Owning an automobile became increasingly attainable to African Americans in the early 1960s and ‘70s, affording increasing freedom of mobility over the past five decades. With that freedom, came increased discrimination and violence. Driving While Black: Race, Space and Mobility in America is a 2015 documentary by historian Dr. Gretchen Sorin and director Ric Burns1 chronicling that journey. The difference in experience and outcomes in various diseases, hospital encounters, and the healthcare experience at large has given rise to the colloquial use of the phrase “‘hospitaling’ while Black” by African Americans. The sixth Plenary Scientific Session abstract, “Poor Treatment Outcomes of Young (<60 Years) African American Patients (Pts) Diagnosed with Acute Myeloid Leukemia (AML) (Alliance),” showed that having AML while young and Black reveals similar discrepant outcomes, and as such, that “AML-ing” while Black’ is unfavorable for survival.

Historically, discrepancies in cancer survival between African American and nonwhite patients (especially for most solid tumors such a breast, prostate, colon) has been largely attributed to socioeconomic factors: those impacting screening, early detection, and access to care.2 The survival outcomes for young Black people with AML, however, are worse even when corrected for socioeconomic variables. This study, presented by Dr. Bhavana Bhatnagar, showed that there may be ethnically variant biologic differences that impact survival.

Myeloid neoplasms are a group of biologically heterogeneous diseases, and increasing advances in cytogenetic and molecular biomarkers have necessitated two revisions by the World Health Organization classifications in a little less than a decade — in 2008 and 2016.3 Acute myeloid leukemia is associated with poor survival, especially in older patients. In recent decades, there has been a greater elucidation of prognostic factors, both molecular and patient-related characteristics. Even in younger AML patients, those between age 18 and 60 years, socioeconomic factors  and African American race have been reported to impact outcomes. However, no large studies to date have systematically investigated whether the discrepancy is owing to socioeconomic factors or race-associated molecular differences.

Studying relatively rarer conditions such as AML, systematically seeking such answers, requires patience and time. In this abstract, the authors present results of their 10-year study. They looked beyond demographic explanations for differences in survival outcomes, further exploring potential ethnically driven molecular signatures. After a passionate, patient, and persistent 10-year quest to acquire enough numbers to show statistical power, their determination (palpable during the presentation) culminated in the findings they enthusiastically shared. They combined population analysis of 11,190 adults from the National Cancer Institute’s Surveillance Epidemiologic End Results (SEER) program, and molecular features from 1,339 patients recruited through the disease consortium Cancer and Leukemia Group B/Alliance for Clinical Trials in Oncology (Alliance).

SEER provided numerous demographic and outcome data of the 11,190 patients diagnosed with AML (excluding acute promyelocytic leukemia) within the 30-year span between 1986 and 2015. To characterize the molecular features, they performed sequencing of 81 target genes in 1,339 patients treated on upfront Alliance protocols across multiple institutions, during an almost identical time frame, 1986 to 2016.

The researchers conveyed with great excitement, humility, and trepidation the results — that despite race being a social construct, in keeping with previous data, their study showed that the strongest predictor of survival was self-reported race in younger patients with AML. African Americans had a statistically significant risk of death when compared to white patients with a hazard ratio of 1.28. The three-year overall survival was nine percentage points lower and also statistically significant (p<0.01), despite there being no difference in rates of achieving first clinical remission. Furthermore, African American patients had more rapid disease progression after first clinical remission, as evidenced by a worse disease-free survival rate. Clinical, cytogenetic, and molecular analysis of the Alliance cohort revealed lower frequency of prognostically favorable mutations such as nucleophosmin1 (NPM1), and higher frequencies of spliceosome gene mutations. Additionally, African Americans harboring FLT3-ITD or IDH2 mutations had worse overall survival (FLT3-ITD HR, 1.95, p=03; IDH2 HR, 2.17, p=0.008). Paradoxically, they noted that harboring known prognostically favorable mutations such as NPM1 or TP53 did not confer the same survival edge in African American patients. The summary of the multivariate analysis showed that not being African American and a disease clone with NPM1 mutations were the only two positive prognostic indicators impacting overall survival in this Alliance cohort.

Combining both analyses, they conclude that self-reported African American race is the most important negative predictor of outcome in the SEER data set. Survival analysis in the Alliance cohort corroborates the finding and establishes African American race as an independent prognosticator irrespective of otherwise favorable molecular markers.

This study, building upon precepts from earlier studies that showed racial discrepancy in AML outcomes, went a step further. The authors were glad to have the opportunity to present such provocative data and suggest that their findings, while exciting, are not the end, by any means, and should serve as a guide post directing researchers to further elucidate the molecular drivers of disease. More work needs to be done, according to Dr. Ann-Kathrin Eisfeld. “As the system continues to address societal issues such as inequity in access to care, attention needs to be paid to exploring the molecular landscape as well,” she said. As we look closely at what the results showed, NPM1/TP53 did not matter, which invokes the question, “Do African American patients with AML need their own classification?” Dr. Bhatnagar buttressed this as an opportunity for exploring precision medicine in this population, as the molecular signatures may suggest different druggable targets.

Both doctors Bhatnagar Eisfeld, on behalf of their collaborators, present this as a call to action for increased collaboration. Their hope is that after this year’s annual meeting, a new progressive coalition can be formed, including the AML working groups in associations such as ASH  and other treatment collaboratives, to create a critical mass, expedite the acquisition of sound data, and encourage faster implementation of clinical trials.

The data presented indicate that zip codes do matter and contribute to outcomes. But in AML survival, it is not the overarching predictor. We have to agree that there is a higher calling to take commensurate action in keeping with the zeitgeist and with our professional obligations as scientists, and to approach care for each patient equitably. To this end, there must be a commitment to resources and research support and to the design of large multicenter national and international studies to expedite the rate of knowledge acquisition. This, the authors suggest, should serve as a model for other disease groups to further elucidate their biologic, genetic, and molecular signatures. It could also advance the detection of druggable targets, affording options for personalized medicine and narrowing the outcome gaps for African Americans and all patients. Much like the freedom of movement that the automobile provided, technological advances in medicine should serve as a pathway to survival.

If this Plenary abstract presentation falls in your wheelhouse, you might also want to check out the on-demand Education Program session “Caring for Patients With Acute Leukemia in Community Hospitals: Who, What, and When to Refer.”