A few years back, Dennis Farina, best known for his roles in “Law and Order” and “Get Shorty” died due to pulmonary embolism in the setting of lung cancer. His death brought media attention to the risk of thrombosis in the setting of malignancy. More than 150 years back, however, Armand Trousseau first reported the relationship between thrombosis and cancer. Cancer-associated thrombosis is now recognized as an important cause of morbidity and mortality and can present in many forms, including arterial thrombosis, venous thrombosis, and disseminated intravascular coagulation. The Scientific Workshop @ ASH on the Interplay Between Coagulation and Malignancy taking place Thursday, December 3, at 7:00 a.m. Pacific Time, and led by session chairs Drs. Lisa Baumann Kreuziger and Jeffrey Zwicker, will discuss what is currently known in this exciting field and address areas of ongoing research.

The session will focus on a few relevant areas of active investigation on this topic. Micro RNAs (miRNA), first identified in the worm Caenorhabditis elegans, are small noncoding RNA molecules that have key roles in post-transcriptional regulation. Workshop presenters will discuss the mechanism and impact of their dysregulation on cancer-associated thrombosis. They will also delve into how components of the coagulation pathway can impact cancer progression, an area that is a focus of active research. The holy grail of cancer-associated thrombosis research is to find ways to model thrombosis accurately so that prophylactic and treatment interventions can focus on high-risk populations. As part of this effort, currently underway biomarker studies evaluating cancer-associated thrombosis will be discussed by leading researchers and physicians in the field. There will be four separate sessions, with one focused on myeloproliferative neoplasms and thrombosis, and the final one devoted to late-breaking research presentations. The target audiences that will likely benefit most from the session are basic and translational clinical investigators and physicians. Another goal of this workshop is to bring together a diverse group of investigators and clinicians at junior and more senior levels to facilitate collaborations — something that I have personally benefited from at previous ASH annual meetings. For residents and fellows who are wondering why their patient developed a clot, this is a session you do not want to miss!

Peter Sondergaard said, “Information is the oil of the 21st century, and analytics is the combustion engine.” The “prehistoric” period of genetic testing began more than half a century ago with the discovery that an additional copy of chromosome 21 causes Down syndrome. Increasingly, making a diagnosis in malignant and nonmalignant hematology requires detection of genomic abnormalities as part of big data analysis and is critical in guiding all important treatment decisions. “Big data” is a term often applied to data sets whose size is beyond the ability of traditional systems to capture, manage, and analyze, and the technology for genomic analysis has increased exponentially, especially over the past few years. Diagnostic laboratories now perform a wide range of testing, from focused panels to sequencing the whole genome or transcriptome to arrive at an accurate diagnosis.

This positions diagnostic laboratories at the leading edge of technological advances in making novel and important discoveries. As a laboratorian, this is an incredibly exciting time for me! The decisions to be made by diagnostic laboratories are significant: What choice of technology does one use among the array of those available? Will it give the treating physician the answers that they are looking for? What happens after “big data” are generated? Bioinformatics processing is a critical downstream event that needs to be considered before testing systems are selected. How does one curate variants that are identified, and how does one go about interpreting novel findings that are frequently made in this type of analysis?

These and other issues will be covered in the exciting Scientific Workshop on Translational Molecular Diagnostics in Hematology, organized by Co-chairs Drs. Piers Blombery and Torsten Haferlach, and taking place Thursday, December 3, at 2:00 p.m. Pacific time. The workshop will also highlight the significant heterogeneity in diagnostic practice and its implications for patient care. Current international attempts to harmonize processes will also be underscored. If this were not enough, real-world genomic discoveries will be spotlighted in an interactive format and will include a molecular tumor board, database tours, and a showcase of novel genomic tools. This workshop will likely be of high interest to those involved in genomic diagnostic testing as well as the consumers of these results (physicians and advanced practice providers), and furthermore, will be relevant to multiple disciplines including hematology, pathology, bioinformatics, and basic and translational researchers. 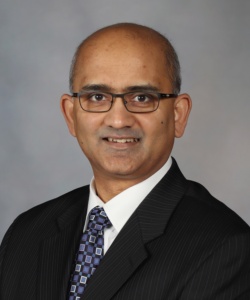 Dr. Anand Padmanabhan is Senior Associate Consultant and Associate Professor in the Divisions of Hematopathology, Transfusion Medicine, and Experimental Pathology in the Department of Laboratory Medicine and Pathology at Mayo Clinic in Rochester, Minnesota. He received his medical degree from Thanjavur Medical College in India, his master’s degree and PhD from Brown University in Providence, Rhode Island, and underwent residency and fellowship training at the College of Physicians and Surgeons of Columbia University in New York, and the Institute for Transfusion Medicine in Pittsburgh, respectively. Dr. Padmanabhan is originally from Chennai, India, and currently resides in Rochester.

Dr. Padmanabhan directs a National Institutes of Health–funded laboratory focused on understanding the pathophysiology of heparin-induced thrombocytopenia, a dangerous thrombotic disorder, with an emphasis on translating research findings to improve diagnosis and treatment of this condition. Additionally, his interests include the evidence-based use of apheresis in human disease.

He is an American Society for Apheresis Representative in the ASH Committee on Practice and a member of the ASH Scientific Committee on Thrombosis and Vascular Biology. Dr. Padmanabhan is a dog lover and a cricket fanatic.