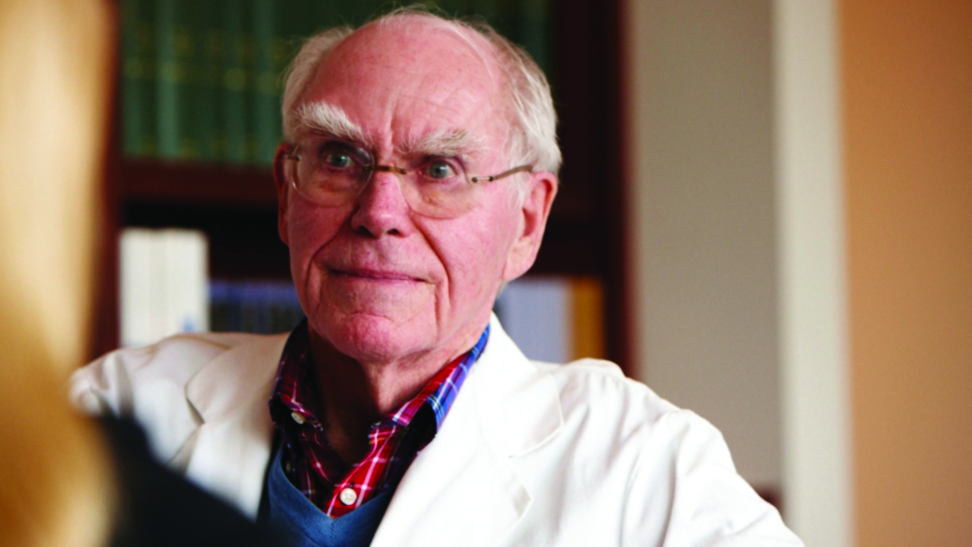 Richard Aster, MD, has been awarded the 2019 Wallace H. Coulter Award for Lifetime Achievement in Hematology. He is a professor in the departments of medicine and pathology at the Medical College of Wisconsin and a Senior Investigator at the BloodCenter of Wisconsin – Versiti.

One of Dr. Aster’s nominators noted that he embodies many attributes of the award’s namesake Dr. Coulter, including “a love of investigation, creativity, tenacity, and generosity…” Just as significant is Dr. Aster’s deep passion for learning, which was sparked during his childhood and never wavered. He received his undergraduate and medical degrees from the University of Michigan and later served as an intern in medicine at the Massachusetts General Hospital in Boston. “I had a consuming interest in science and nursed hopes to embark on a research career,” he said. “In medical school, I worked with the thyroid disease group and was thinking about becoming an endocrinologist.”

But as with many great scientists’ careers, it was a hint of chance that helped to propelled Dr. Aster toward his chosen field, back when he was a medical resident seeking out openings at the National Institutes of Health (NIH). “I learned about opportunities available at NIH to engage in research training while serving in the Public Health Service,” he recalled. “There were no openings in endocrinology, but one was available in hematology, which I accepted.”

There, Dr. Aster’s curiosity skyrocketed, in an environment that was just as dedicated to knowledge and discovery as he was. He described NIH as an “extremely exciting place to be,” where he worked and learned in close proximity to future Nobel Prize winners and enjoyed a diverse collection of courses conducted by NIH faculty, from molecular organic chemistry to advanced statistics. “At that time, it wasn’t considered necessary to have a PhD degree to engage in meaningful laboratory-based medical research,” Dr. Aster said. “The three years I spent as a clinical associate at NIH were the next best thing to a PhD degree I could have asked for. Experience gained during my NIH years did more than anything else to prepare me for a career in translational research.”

Dr. Aster’s clinical research and clinical interests have focused on immune diseases affecting blood cells and especially those involving blood platelets. His contributions to the field began early on when he analyzed the distribution of platelets in the spleen and circulation of patients with liver disease during his time at Boston City Hospital. In 1970, he embarked on a career at the Blood Center of Southeastern Wisconsin in Milwaukee (now the BloodCenter of Wisconsin), and there he helped to develop the center into a global reference laboratory and a renowned research institution. His contributions led to the identification and characterization of roughly one-third of the 35 known constituents of the platelet-specific alloantigen system, and insights from this work informed the investigation of the pathobiology of neonatal alloimmune thrombocytopenia, primary immune thrombocytopenia, and drug-induced immune thrombocytopenia. His body of work also includes 391 peer-reviewed articles, hundreds of reviews, and the development of diagnostic techniques that are now clinical standards. In 2012, he was awarded the Henry M. Stratton Medal. He shares the credit for these accomplishments with his esteemed BloodCenter colleagues and recognizes his work as part of a far bigger picture. “Progress we have made over the years has largely been incremental,” he said, “in the hope that findings made will eventually add up to something useful.”

Dr. Aster’s current major interests are heparin-induced thrombocytopenia-thrombosis and improved methods for detecting drug-dependent, platelet-reactive antibodies. When asked about the areas in which he sees the greatest potential for breakthrough, he remarked on the rapid pace of scientific progress. “It is really hard to know where the next breakthroughs will come,” he said, but highlighted single-cell PCR and high-throughput sequencing of RNA transcripts as critical in improving hematologists’ understanding of antibody-mediated hematologic disorders.

Himself a mentor to numerous trainees and junior faculty members with successful independent careers, Dr. Aster spotlighted several individuals who helped to enrich his career path, including William Parkinson, PhD, and William Beierwaltes, MD, at the University of Michigan; Walter Bauer, MD, William Castle, MD, and James Jandl MD, at the Harvard Medical School; and N. Raphael Shulman, MD, at the National Institutes of Health. He remarked that their best “advice” did not come in the form of words at all, but rather in the examples they set “through their hard work, integrity, and passion for research.”

To any medical researchers contemplating a step toward hematology, Dr. Aster couldn’t recommend his chosen field more strongly. “Many hematologic disorders, genetic and otherwise, were among the first to have their pathogenesis worked out and effective treatments developed because blood is so readily accessible and easy to work with in the laboratory,” he said. “This is still true today, and anyone interested in a medical research career would do well to consider hematology as a steppingstone.”

As Dr. Aster prepared to receive this prestigious award, he reflected on his early days in hematologic investigation. “I attended my first ASH annual meeting in 1962,” he remembered. “There were about 350 attendees, and all the work was done by volunteers … It has been an amazing experience to watch ASH grow to the organization it is today and a great privilege to have played a small role in some of the progress seen during this time frame.

“I have enjoyed every minute of this long journey, and I am humbled and deeply grateful for being recognized by ASH for the Wallace H. Coulter Lifetime Achievement Award. It is a great honor.”

Dr. Aster will be recognized Sunday at 1:30 p.m. in Hall D of the Orange County Convention Center by ASH President Roy Silverstein, MD.