Engineering Better Care for All

Mohandas Narla, DSc, has been awarded the 2020 Wallace H. Coulter Award for Lifetime Achievement in Hematology. He is vice president for research at the New York Blood Center and a member of the adjunct faculty at the Laboratory of Blood and Vascular Biology at Rockefeller University in New York. 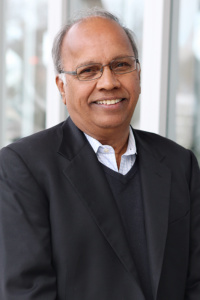 Many of Dr. Narla’s nominators stressed not only the ground-breaking research he has performed, but also his contributions to ASH and the way he has shaped so many young investigators. With his lasting commitment to the field of hematology through outstanding contributions to education, research, and practice, Dr. Narla embodies of the spirit of this award in more than a few ways. And, like the award’s renown namesake, Dr. Narla is also an engineer and inventor who devoted his skills to the advancement of hematology. His extraordinary 45-year research career focused on the study of red cell function to better understand the pathophysiology of inherited and acquired red blood cell disorders, with the ultimate goal of developing better therapeutic strategies for managing anemia in patients around the world.

Dr. Narla remarked that his research interests from the very beginning have centered around the red blood cell and the deformability of its membrane. He began his engineering studies at the University of Madras and the Indian Institute of Technology in Kanpur, eventually earning a doctoral degree in chemical engineering at Washington University in St. Louis. Dr. Narla’s postdoctoral instruction at the Institute of Cellular Pathology in Paris sparked his passion for red blood cells and erythropoiesis, but he also knew that fulfilling that passion would require comingling his training with that of his peers. “My engineering background had not prepared me for a deep understanding of the red cell disorders,” said Dr. Narla. “I sought collaborators with diverse expertise to expand the depth of my knowledge and expand my research activities … It has allowed me to work closely with a succession of wonderful colleagues from around the world, many of whom have become special friends.” He commented that the breadth of their work has led to improved understanding of red blood cell membrane disorders, hemoglobinopathies, malaria, and normal and disordered erythropoiesis.

Along the way, Dr. Narla gained connections to luminaries in the field, and he names prominent French hematologists Drs. Marcel Bessis and Gil Tchernia as having a profound influence on his career. The two mentors inspired Dr. Narla to contribute his unique engineering perspective to hematologic research and to, in his words, “continuously design experiments not to prove, but to disprove” his hypotheses. Dr. Narla and Dr. Bessis worked together to invent the ektacytometer, which characterizes red cell abnormalities. The device is still used today in clinical research and diagnosis — a fact that Dr. Narla finds gratifying. His more recent work involves developing strategies for the quantitative analysis of the various stages of erythropoiesis in human peripheral blood and bone marrow. “The detailed understanding of normal and disordered erythropoiesis will lay the groundwork for novel diagnostic and therapeutic options that can impact patient care in the future,” he said.

Dr. Narla looks to the future with the same fervor that brought him to hematology to begin with. He is particularly excited about new therapeutic strategies that involve new drugs and novel cell and gene therapies for the treatment of sickle cell disease and thalassemia, but also noted the socioeconomic roadblocks that patients and caregivers face. “The biggest challenge is how to make the benefits of these developments available to patients in lower-income countries and communities, where the vast majority of these patients reside,” he said.

In his illustrious career, Dr. Narla has described the macrophage island and red cell cytoskeleton, and has contributed an exact profile of the terminal stages of erythropoiesis at the cellular level, and within those cells, the transcriptional and epigenetic profile of each stage. With his engineering prowess, Dr. Narla has invented assays that address numerous scientific problems, thereby giving the field an invaluable set of tools.

Looking beyond the laboratory, Dr. Narla is also recognized for his willingness and capability as a leader, bringing together researchers from across the globe and making contributions to various committees within ASH and at the National Institutes of Health. In addition to the projects listed, Dr. Narla dedicates copious time to being a mentor, an area where he is celebrated for his benevolent and supportive behavior.

Dr. Narla shared that he is both humbled and honored to be the recipient of this year’s Wallace H. Coulter Award and is thrilled to be the first engineer to be recognized. To those scientists considering entering hematology, he has plentiful words of encouragement. “Within the field, you are able to apply the latest conceptual and technological breakthroughs to understand the pathophysiology of the underlying diseases, develop new and novel therapies, and improve care for patients around the world,” he said. “It is a satisfying and rewarding career to pursue and the most collegial in terms of professional interactions.”