Fair Is Foul and Foul Is Fair: Race, Ethnicity, and Disparities Hovered Through the Meeting Air! 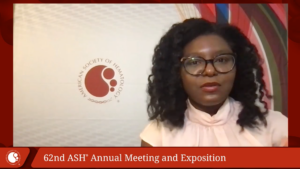 Dr. Weeks answers questions from attendees during the Special Scientific Session on Race and Science.

“Fair is foul, and foul is fair;
Hover through the fog and filthy air.”
— Macbeth, Act 1, Scene 1

The apportionment ratios of personhood based on race, ethnicity, and gender, once seemingly fair from the Western worldview, are emerging as increasingly foul to many. Although race is a social construct, systemic efforts over generations have influenced strategies that enforce and sustain clear spatial and geoeconomic boundaries. These strategies vary greatly in their obviousness. Some are murky, opaque, and nevertheless insidious to unaware or unschooled onlookers. These geoeconomic boundaries affect longevity and health outcomes across almost all disease categories. The American Cancer Society’s Cancer Facts and Figures for African Americans 2019-2021 report stated that Black people collectively had the highest death rate and shortest survival of any racial/ethnic group for most cancers in the United States.1 What we had previously thought to be a gulf, was further exposed to be more like a chasm, by the unevenly distributed impact of the ongoing COVID-19 pandemic.2

These differences are complex and multifactorial in etiology and involve social, economic, geographic, and cultural factors, all of which impact access to care. The field of oncology in recent years has  revealed additional biologic variables contributing to the gaps in our understanding. ASH’s statement on diversity, equity, and inclusion was underscored by ASH President Dr. Stephanie Lee on June 9 of this year with an additional emphasis on readdressing and recommitting to the Society’s dedication to narrowing the chasm. The statement culminated with calls to action for members to get involved, including a suggestion to conduct research on health disparities and the social determinants of health.

A search of this year’s program using the key word “disparity” yields a total of 84 sessions spanning the Scientific and Education Programs as well as oral and poster abstracts. This feat of coverage is just one piece of the bigger picture, but it highlights an intuitive, reflexive pull toward this issue and suggests the presence of a movement. More provocatively, it may be that while this issue has been recognized for a long time, its acknowledgement has been woefully wanting. However, our individual commitments to researching the issue across the United States, may have served as a catalyst, pushing its acknowledgement upstream to higher and higher institutional levels.

The prelude to the coverage of disparities in science at this year’s meeting is a podcast interview conducted by The Hematologist Editor-in-Chief Dr. Laura Michaelis, which presents a brilliant conversation with Dr. Chancellor Donald about disparities in science, outcomes, and access to care (soundcloud.com/ash_hematology/2020-ash-annual-meeting-disparities-in-science-with-drs-laura-michaelis-chancellor-donald).

The Scientific Workshop on Epidemiology “Disparities in Hematologic Diseases: Risk, Outcomes, and Care,” chaired by Dr. Neil A. Zakai and moderated by Drs. James R. Cerhan, James M. Foran, and Wendy Cozen, who kept the session invigorated and engaging, had the stated goal of filling an increasingly pressing “critical gap in the meeting in the areas of epidemiology and population science.” The session offered broad representation of malignant and nonmalignant diseases in hematology as well as a whole new class of hematology, courtesy of the year 2020 — hematologic complications of COVID-19. It provided a forum for epidemiologists, clinicians, and basic scientists to present their research and interact with one another. Above all it created a space for interaction among practitioners and experts as well as trainees with the hopes of capturing their interest in the subject. Furthermore, placing the spotlight on these ever-present threats to improving health outcomes, the session was aimed at promoting further research interest and facilitating collaborations. Specific topics included updates on disparities in risk and survival patterns for lymphoid and myeloid neoplasms from Surveillance, Epidemiology, and End Results and World Health Organization data; molecular epidemiology studies of genetic and environmental risk factors for lymphoid and myeloid malignancies and the extent to which these explain disparities; differences in coagulopathies by race/ethnicity and how much is explained by access to care versus underlying biology; and racial/ethnic differences in immunity and comorbidities as underlying causes of differences in COVID-19 outcomes.

The “Special Scientific Session on Race and Science” (available on demand) was co-chaired by two informed and passionate experts, Drs. Alan E. Mast and Wally R. Smith. They were joined by Dr. Lachelle Weeks, currently a third-year fellow in medical oncology, who presented on “The Diversity-Innovation Paradox in Science.” Dr. Weeks created a social justice committee during her residency, stirred by the discomfort she felt with the paradoxically loud silence during rounds and in physician lounges following yet another racial tragedy in 2017. The diversity-innovation paradox reveals the incongruence in academic systems, particularly the underrepresentation of minorities, in areas that should be driving innovation and advancements in the field of science. She shared that the percentage of tenured and tenured-track underrepresented minority faculty in the department of arts and sciences at her institution is still unchanged at 3 to 4 percent since 2004. The session provided a “safe space” for ongoing discourse with a live Q&A. I caught up with Dr. Weeks who shared her hopes that this topic du’jour provides us with an opportunity to put our brains together and design better data collection models, if we begin with the right premise. Better information will lead to better innovation with broader applicability.

The topic of disparities was captured on the big stage as well, in an abstract presented during the Plenary Scientific session, titled, “Poor Treatment Outcomes of Young (<60 Years) African American Patients (Pts) Diagnosed With Acute Myeloid Leukemia (AML) (Alliance)” (available on-demand). The abstract covered another disparity in malignant hematology — outcome discrepancy in young adults with AML. The results of the study were presented by Dr. Bhavana Bhatnagar on behalf of Alliance. The molecular portion of the study profiled 81 genes in 1,339 patients with AML treated on frontline Cancer and Leukemia Group B/Alliance protocols. Self-reported African American race was the most negative patient-associated predictor of overall survival in young (<60 years old) patients with AML. It remained one of the most important negative predictors even considering molecular markers. The authors suggest that these findings serve as an urgent call to action for further elucidation of molecular targets in this patient demographic. To achieve this goal in a much shorter period than the 10-year span of their results, further collaboration of treatment groups, nationally and internationally, might be paramount. For ASH News Daily’s full reporting of this session, including an interview with the authors, see Monday’s coverage of the Plenary Scientific Session.

ASH News Daily would be remiss if we did not include the 2020 ASH Award for Leadership in Promoting Diversity recipient, Dr. Edward J. Benz, Jr., who was honored for his efforts to promote women and underrepresented minority hematologists throughout his career (read a profile of Dr. Benz via http://www.ashnewsdaily.org/uplifting-diversity-strengthening-progress/).

As introduced in the podcast by Dr. Chancellor Donald, this battle has been long and drawn out, initially documented by W.E.B Du Bois in 1899. Keeping the discourse on race, ethnicity, and diversity in the “air” through the various ASH platforms contributes to shifting the fog away ever so slightly, shedding increasing measures of light on the issue. Drs. Michaelis and Donald left us with a take-home message: These conversations, while uncomfortable, pale in comparison to the experiences of those who suffered injustices in generations past. They must be had, and this year, we had a forum. Onward with the hurly-burly as the battle is far from won. Have the courage to continue the conversations wherever you might be!