A River Runs Through It 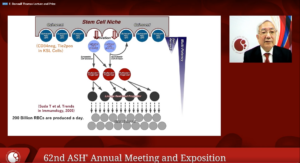 The legacy of E. Donnall Thomas is one that defies comparison, rivaled perhaps only by Marie Curie and Sidney Farber, in his success creating entirely new fields of both scientific exploration and clinical care. The “Father of Bone Marrow Transplantation,” Dr. Thomas is responsible both directly and indirectly for saving the lives of more patients than any of us will see in our lifetime. He carried the concept of bone marrow transplantation from a whispered wish for a cure, to a basic scientific theory, to groundbreaking animal studies, and finally to cancer-breaking clinical studies. He then took the clinical data back to the lab, contributing to the modern understanding of HLA-typing, unmatched donors, preparative regimens, graft-versus-host prevention, and graft-versus-tumor optimization. Beyond simple knowledge and understanding, manifesting an entirely novel therapeutic modality from nothing required an unyielding perseverance that was lauded by his colleagues. It is just this sort of perseverance that led this year’s E. Donnall Thomas Lecture and Prize recipient to his own detailed understanding of the processes Dr. Thomas willed into existence. Dr. Toshio Suda has felt at times in his more than 40-year career studying self-renewal of hematopoietic stem cells (HSCs) that he was “ascending a spiral staircase, [hoping he] was not just going round and round on the same dimension.” There are no landings, no intervening floors, no breaks in a spiral staircase upon which to pause and collect oneself. Like a river, it flows ever on, around bend after bend. Each step leads to another, and with sufficient perseverance equal to that of Dr. Thomas, the potential for progress is limitless.

In his fascinating and inspiring lecture recounting just how far he has advanced the field during his life, Dr. Suda described the at times opposing roles of the intrinsic programming of stem cells and extrinsic niche influences, quiescence, and activation in response to cellular metabolism, and how these two dichotomies interact dynamically to result in stem cell differentiation and expansion simultaneously. He opened with a brief history of stem cell biology by harkening back to the first description of the “stammzelle” by Ernest Haeckel in 1868, more than 150 years ago. What would Dr. Haeckel, and indeed Dr. Thomas, say if they could see what Dr. Suda has uncovered in just the past 40 years? During his lecture, Dr. Suda moved through those 40 years and was able to tell so much of the story of the HSC using only the discoveries that he or his mentee investigators have made — an impressive feat that demonstrates just how deserving he is of being this year’s award recipient.

He began by establishing that the mechanism of stem cell fate decisions has been the main goal of his research throughout his career, beginning with an experiment of paired daughter cells 30 years ago. He noted that two daughter cells originating from the same HSC and separated in a controlled environment would give rise to two different cell types, indicating that cell fate must be at least in part determined by some intrinsic instruction. In fact, in an analysis of more than 300 paired daughter cells, approximately 25 percent showed asymmetric differentiation, with many lineages observed including neutrophil, macrophage, eosinophil, erythroid, and megakaryocyte. The translation of those instructions would be the subject of a career’s worth of research.

But it was clear that there was more at play than simply a hardwired set of instructions. He not only discussed how Tie2-GFP+ HSCs demonstrated symmetric, self-renewal division, and how Tie2-GFP- HSCs more so demonstrated either asymmetric division or symmetric, commitment (or differentiated) division, but going a step further, he demonstrated how extrinsic stem cell niche-derived angiopoietin 1 treatment resulted in significantly increased cell division capable of sustaining the HSC pool. He went on to explain how his research flowed naturally into the role of HSC metabolism, like “the river in a Japanese garden.” Discoveries flowed from the lack of long-term (16-week) engraftment of HSCs in the absence of Atm protein (Atm-/-), to the understanding that loss of Atm-induced increases of ROS, which leads to p38MAPK and subsequently p16INK4a/Rb upregulation. This in turn results in defects in stem cell function and ultimately to the targeting of this pathway via various inhibitors to restore HSC function. The river took another bend with the discovery that HSCs in the hypoxic niche under strong stress (Atm deficiency, Foxo3a deficiency, or serial BMT) have upregulated ROS and p38MAPK that leads to strong proliferation and differentiation, which can ultimately end in stem cell exhaustion and bone marrow failure. The anaerobic glycolytic pathways are therefore vitally important for the limitation of ROS and oxidative stress and are much more active in quiescent stem cells than in activated or cycling HSCs. The demonstrated importance of the metabolome to HSC function and differentiation provides the potential to manipulate them — a capability that Dr. Suda envisions as a reality in the not-too-distant future.

This is only a small sampling of the metabolic mechanisms Dr. Suda has helped uncover thus far on his path down the river (or up the spiral staircase) of his career in stem cell biology. If you have an interest in hematopoiesis, bone marrow transplantation, or science of any kind, or if you simply want to be inspired before you close the book on #ASH20, I encourage you to watch the recorded version of Dr. Suda’s lecture, both to hear the rest of the science he shared, and to recognize what a truly great leader and mentor looks like. Perhaps most impressively, during a lecture meant to honor him and highlight his enormous contributions to the field of stem cell biology, Dr. Suda named and provided an image for every first author investigator he supervised during the investigations he discussed. Just as E. Donnall Thomas is considered the father of bone marrow transplantation, Dr. Suda has taken on that mantle of a patriarch in the long genealogy of stem cell investigators, ensuring not only the advancement of the science during his lifetime, but for another 150 years to come. His contributions, and those of his colleagues and mentees, will be a vital part of all the contributions to come, even though they eventually may all flow together in some greater understanding. For in the words of William Wordsworth, “Eventually, all things merge into one, and a river runs through it.”