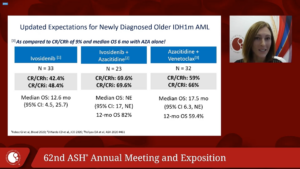 All those who suffered through the once esoteric agony of mastering the minutiae of the tricarboxylic acid (TCA) cycle can now rejoice. As recounted during Monday’s Beutler lecture by Drs. Ari Melnick and Courtney DiNardo from the perspective of a scientist and clinician-investigator, respectively, the development of mutant IDH in the treatment of acute myeloid leukemias (AMLs) represents a beautiful interplay of genetically defined metabolic perturbations and epigenetics. I will focus the first part of this recap on the translational component of the lecture, given by Dr. DiNardo.

IDHs 1 to 3 are critical metabolic enzymes encoded by three paralogs that catalyze the oxidative decarboxylation of isocitrate (ICT) to α-ketoglutarate (aKG), NAD(P)H, and CO2. IDH1 operates in the cytosol whereas IDH2 and IDH3 reside in the mitochondrial matrix (as part of the TCA cycle). While these enzymes are involved in a variety of biochemical reactions, essential to understanding their role in leukemogenesis is how IDHs epigenetically control gene expression through modulation of dioxygenases that depend on aKG as a co-factor, including the ten-eleven translocation methylcytosine dioxygenase 2 (TET2) enzyme. TET2, in turn, catalyzes the conversion of 5-methyl-cytosine (5-mC) to 5-hydroxymethyl-cytosine (5-hmC), which promotes DNA demethylation, permitting underlying gene expression. Nearly all IDH1/2 mutations confer neomorphic activity on the encoded enzymes, such that they actually partially abrogate the forward reaction (i.e., ICT → aKG) by reducing aKG to the R-enantiomer (R) of 2-hydroxyglutarate [(R)-2HG]. 2-HG behaves as an oncometabolite, competitively inhibiting the activity of dioxygenases like TET2, inducing a TET2 loss-of-function phenotype with a transcriptional and thus phenotypic differentiation block. It is no coincidence then that TET2 is frequently mutated in AML, related myeloid malignancies, and angioimmunoblastic T-cell lymphomas, and these mutations are mutually exclusive with IDH1/2 mutations in these same malignancies.

Serendipitously, Dr. DiNardo’s hematology-oncology fellowship project at the University of Pennsylvania began with the question of whether the measurement of elevated 2-HG levels in patients with AML could predict underlying IDH1/2 mutations (which it ultimately could). With a young family in tow, she then made the leap to faculty at the University of Texas MD Anderson Cancer Center the same year that small-molecule inhibitors of mutant IDH enzymatic activity were developed. The rest, as they say, is history. As part of a collaborative effort, Dr. DiNardo led the early-phase studies of IDH inhibitors in IDH-mutated AML. Even as a single agent, they induced marrow responses and transfusion independence, correlating in an almost poetic fashion with reductions in 2-HG levels and reversal of phenotypic differentiation blocks. These data were the basis of the current U.S. Food and Drug Administration (FDA) approvals of ivosidenib (IDH1 inhibitor) and enasidenib (IDH2 inhibitor) monotherapy in IDH1/2-mutated AML. As with lifting the differentiation block in acute promyelocytic leukemias (APLs), however, there is a risk of clinical differentiation syndrome with the application if IDH inhibitors in IDH-mutated AML. Moreover, AML is moblike in its ruthless adaptability, as evidenced by the 2-HG dependent and independent resistance mechanisms described by Dr. DiNardo that can emerge under the selective pressure of IDH inhibition. These include mutations at the neoenzymatic active site, isotype switching, acquired co-mutations in pivotal myeloid transcription factors, and emerging signaling pathway activating mutations. These are the basis of ongoing work on the part of Dr. DiNardo and others exploring rational combination therapies in IDH-mutated AML, including combinations with another small-molecular inhibitor that she also helped bring to the clinical arena, venetoclax.

Her lecture included an equally important story about the critical importance of mentorship and of never accepting the status quo (see our exclusive Q&A with Dr. DiNardo). However, the most resonating aspect of the session was when one of Dr. DiNardo’s patients — successfully treated with ivosidenib for IDH1-mutated AML — shared her experience with benefiting from these rapid translational efforts. To quote the patient, a remarkable woman who is a retired professor and traveling musician, “And every morning, when I take these two [ivosidenib] pills, I thank God, I thank the scientists that developed targeted therapy, and I thank Dr. Courtney DiNardo, who at the very beginning said, ‘Shirley, you’re in the right place, at the right time, with the right mutation.’ And she was right.”

*Read part 2 of the recap of this year’s exciting 2020 Beutler Lecture, with Dr. Ari Melnick.

Dr. Beutler was an authentic clinician-scientist who eschewed the perceived gulf between the practice of medicine and basic science. Unlike the modern “laser-focused” academics of today, he studied a diverse range of topics in hematology and cellular metabolism with gusto. These included, but are not limited to: red cell enzymopathies, iron metabolism, Gaucher disease, Tay-Sachs and Sandhoff diseases, and even the development of the chemotherapy agent cladribine (2-chlorodeoxyadenosine) that he subsequently received as a patient with mantle cell lymphoma. Early on in his career, he discovered X-linked G6PD deficiency to be the basis of oxidative hemolysis in primaquine-sensitive persons. This led to his X-chromosome inactivation (XCI) hypothesis, a major form of epigenetic silencing. As such, I think he would find the unifying topic of this year’s honorary Ernest Beutler lectures to be fitting: how the discovery of epigenetic mutations as major drivers in hematologic malignancies has been effectively translated into clinical practice with the application of mutant isocitrate dehydrogenase (IDH) inhibitors.

For an archive of entertaining historical interviews with Dr. Beutler himself visit the ASH website.