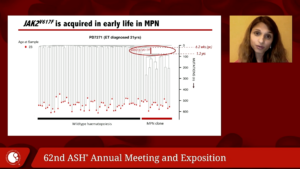 In 2020, we are all running behind. Research stalled or halted due to a deadly pandemic becomes just another reason on a long list that prevents us from getting our science finalized before it is shared. Fortunately, ASH provides a mechanism to those scientists whose meaningful research needs to be shared with the larger ASH community at the annual meeting, the Late-Breaking Abstracts Session. This year’s session was moderated by Drs. Christopher Flowers and Sioban Keel.

In the first abstract, Dr. Jyoti Nangalia raised a possibility of enabling preventative strategies in myeloproliferative neoplasms (MPNs). The research presented on behalf of her colleagues elegantly shows that childhood and in utero acquisition of JAK2 and DNMT3A mutations occur in MPNs. They described variable rates of clonal expansion as well as the observation that clonal evolution within clones is assisted by sequential driving mutation acquisition, which can cause briskness of growth. Preventative strategies may be possible by exploring rates of expansion as determined by onset to diagnosis and mutation rates.

Dr. Charlotte Bradbury “lifted-off” with the second late-breaking abstract, which discussed the FLIGHT Trial. In this multicenter, open-label, randomized controlled trial (RCT), the researchers tested the hypothesis that mycophenolate (MMF) combined with corticosteroids is a more effective treatment pathway for first-line immune thrombocytopenia (ITP) than corticosteroids alone, which is standard of care. This is the first RCT using MMF to treat ITP that demonstrated good efficacy and tolerability, despite the inclusion of approximately 40 percent of patients older than 70 years. As such, the team proposed that MMF may be considered as an effective and well-tolerated firstline therapy alongside a short course of steroids.

Acute leukemias of ambiguous lineage (ALAL), including those that express combinations of myeloid, T-lineage and stem cell markers, have remained perplexing in their diagnosis and management. In the third late-breaking abstract, Dr. Lindsey Montefiori described work to define the genomic basis of these leukemias. The data presented highlighted the influence of transcriptional and genomic analysis and of identifying the biological processes among different disease entities. This work has integrated a group of ALALs defined by enhancer hijacking of BCL11B. This new subtype of ALALs composed of multiple diagnostic entities within immunophenotyping includes both mixed phenotype acute leukemia-positive and negative leukemias.

In the fourth abstract, Dr. Andreas Hochhaus described the use of a novel drug, asciminib, for chronic myeloid leukemia (CML), specifically in patients with resistance and intolerance to at least two tyrosine kinase inhibitors (TKIs) in the ASCEMBL study. Because BCR-ABL remains the key driver of CML even in patients beyond second-line, and asciminib is a specific BCR-ABL inhibitor that has shown a favorable benefit risk profile in this patient population, asciminib is a first-in-class STAMP (Specifically Targeting the ABL Myristoyl Pocket) inhibitor with a new mechanism of action that is different from approved TKIs that bind to the ATP site of the BCR-ABL1 oncoprotein.

ETNK1 is identified in about 13 percent of patients affected by atypical chronic myeloid leukemia (aCML), in 3 to 14 percent of chronic myelomonocytic leukemia, and in 20 percent of systemic mastocytosis (SM) patients with eosinophilia. In the presented work, the role of these mutations was explored by using cellular CRISPR/Cas9 and ETNK1 overexpression models as well as samples from patients with aCML. In this fifth late-breaking abstract, Dr. Diletta Fontana proposed a novel mechanism by which reduced activity of mutated ETNK1 leads to an increased mitochondrial activity and reactive oxygen species (ROS) production, and therefore, accumulation of new mutations. The treatment with phosphoethanolamine leads to restoration of the normal mitochondrial activity through the suppression of succinate dehydrogenase, normalization of ROS production, and protection of DNA from ROS-mediated damages.

In the final abstract, Dr. Steven Pipe presented the first report of a phase III study in patients with hemophilia B, and the largest gene therapy trial cohort reported to date. Mean factor IX activity considerably increased to near normal levels at 26 weeks post-etranacogene dezaparvovec, meeting the first co-primary endpoint. Patients were able to discontinue prophylaxis. Bleeding was eradicated in most patients throughout the trial.

Please be sure to view the session on demand to catch up on some of this fresh science.