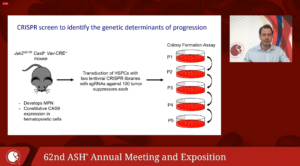 What do Silicon Valley longevity fanatics and blast phase transformation of Philadelphia chromosome–negative myeloproliferative neoplasms (MPNs) have in common? Both are intent on manipulating the signaling axis of STK11-AMPK and related kinases to their benefit. Christian Marinaccio, currently a PhD candidate at Northwestern University, and colleagues shared their unexpected finding that STK11 loss and resultant HIFα stabilization are cooperating events in the leukemic transformation of Philadelphia chromosome–negative chronic-phase MPNs.

Background. Myeloid transformation risk ranges from 10 to 20 percent for primary myelofibrosis, 2 to 4 percent for polycythemia vera, and 1 to 2 percent for essential thrombocytosis,1,2 usually through an intermediary myelofibrotic stage for the latter two entities. Compared to de novo acute myeloid leukemias (AMLs), AMLs arising from an antecedent chronic-phase MPNs have abysmal long-term outcomes, even if the treatment strategy includes allogeneic stem cell transplantation.3 This reflects the distinct underlying mechanisms that drive post-MPN leukemogenesis. Aside from loss of tumor suppressor p53,4 shockingly little is known about what events cooperate with the enhanced JAK-STAT pathway signaling that is the hallmark of MPNs ¾ driven by mutually exclusive, canonical mutations in JAK2V617F, MPLW515L, or CALR ¾ to promote blast transformation.

Serine/threonine kinase 11 (STK11), also known as liver kinase B1 (LKB1), is a “master kinase” that multitasks even better than a millennial. Now, take a deep breath and stick with me here… STK11 regulates cell-cycle progression, autophagy (think back to the “longevity fanatic” remark), as well as lipid and glucose metabolism. In response to metabolic stressors (e.g. depleted ATP, hypoxia, fasting), STK11 phosphorylates its main downstream enforcer, 5’AMP-activated protein kinase (AMPK) and related kinases. AMPK in turn switches off mammalian target of rapamycin complex 1 (mTOR1) signaling, which serves to upregulate mitogenic transcription factors (that if unchecked, promote tumorigenesis), including cyclin D1, hypoxia inducible factors (HIFs), and c-myc, to name a few. Critically, activated AMPK also promotes p53-dependent apoptosis (a review regarding the role of the BCL-2 family of proteins in apoptosis can be found in ASH News Daily). Given the importance of mTOR1 hyperactivity in cancers, it is not surprising that somatic mutations and losses of chromosome 19p13 impacting the STK11 gene are commonly found in solid tumors, especially small-cell lung and cervical carcinomas. However, STK11 is critical to hematopoietic stem and progenitor cell (HSPC) survival,5 intimating that downregulation of STK11 should not be similarly seen in hematologic malignancies.

What if upregulation of another pathway that promotes HSC renewal and proliferation could counterbalance the deleterious impact of STK11 downregulation on hematopoiesis though? Enter, the intriguing findings that Mr. Marinaccio presented at yesterday’s Plenary Scientific Session:

Future lines of investigation. One question that remains to be answered is the mechanism(s) by which STK11 is downregulated at the protein level, as no somatic mutations in STK11 have been identified in patients with post-MPN AML. Mr. Marinaccio speculates that “this could instead be the result of an epigenetic event or alteration in the mechanisms [governing] its protein stability.” Another question is how their model fits with cases in which the MPN driver mutation is lost at blast transformation. Mr. Marinaccio replied, “Given that the loss of STK11 itself leads to ineffective hematopoiesis, we believe that enhanced JAK/STAT signaling conferred by MPN driver mutations is an essential component in STK11 deficient cells, likely by allowing their survival and expansion. This model suggests that downregulation of STK11 would be restricted to that subset of tumors which retain JAK2, MPL, or CALR mutations… Further studies to assess STK11 levels in a larger group of patients are needed as well as comparing the levels in blast phase disease with or without the driver mutations.”

Rational therapeutics. Given the long-established importance of the STK11/AMPK/mTORC1 axis in tumorigenesis and metabolic diseases, there is no need to therapeutically reinvent the wheel. There are several existing drugs that have the potential to restore or mimic a STK11 active downstream state. One candidate drug class are biguanides, like good ol’ metformin, that upregulate STK11/AMPK signalling by inhibiting mitochondrial oxidative phosphorylation. Inhibitors of mTORC1, the prototype being rapamycin (sirolimus), have already been tried in several early-phase clinical trials for AML (although not specifically post-MPN AML). When asked about why this approach has not been particularly successful, Mr. Marinaccio offered, “…interestingly MPN chronic phase already has an increase in mTORC1 signaling, and that is probably then conserved in MPN blast phase. One issue with rapamycin and rapalogs is that they do not inhibit completely mTORC1, and there are downstream substrates of mTOR that are rapamycin resistant, possibly hampering the ability to achieve the effect of decreasing cell growth. Additionally, there is evidence that phosphorylation of mTORC1 substrates can be regulated by other kinases including GSK3b, providing a compensatory mechanism to counteract mTORC1 inhibition.” Pivoting to newer candidate agents, there are HIF1a inhibitors already under investigation in the treatment of several solid tumors that could be commandeered. Direct AMPK agonists are another investigational avenue to explore in accelerated- or blast-phase MPNs.