When the Music Plays Without the CD: How ABC-DLBCLs Thrive Due to BCL10 Gain-of-Function Mutations 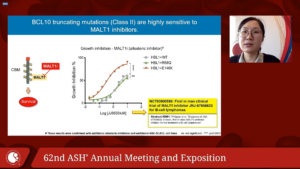 “There are more lymphoma mutations than there are labs that study lymphoma mutations,” Dr. Ari Melnick of Weill Cornell Medicine told me over a Zoom chat. He was trying to express that precision medicine in lymphoma is not an easy terrain to navigate, but the Melnick lab is in unwavering pursuit of a better future for patients with lymphoma. “We want to treat patients with more efficacy and less toxicity; chemotherapy is the standard, and I’ve devoted my life to eradicating chemotherapy… this is what has to be done,” Dr. Melnick said. Of course, the goal of our chat was for him to help out a sickle cell doctor, assigned to cover a Plenary Scientific Session abstract, “BCL10 Gain-of-Function Mutations Aberrantly Induce Canonical and Non-Canonical NF-κB Activation and Resistance to Ibrutinib in ABC-DLBCL,” examining activated B-cell–diffuse large B-cell lymphomas (ABC-DLBCLs). The goal was to save me from drowning in an alphabet soup of lymphoma biology.

My anxiety amplified as I began reading about DLBCLs, the most common non-Hodgkin lymphoma in the United States. To quell that anxiety, I thought I would read about the basic science to steady my ship of understanding in a turbulent sea of malignant hematology. Then, I read about the rapidly amplifying appreciation of the heterogeneity in DLBCLs. They have distinct biologic, morphologic, and genetic behavior. I was in way over my head. So, thankfully, Dr. Melnick, one of two 2020 Ernest Beutler Lecture and Prize honorees, agreed to chaperone this lymphoma journey I hesitantly embarked on.

As my guide through this academic trip, he opened my eyes to the world of aggressive ABC-DLBCLs — an area lacking in the way of precision medicine. R-CHOP (rituximab-cyclophosphamide, doxorubicin hydrochloride, vincristine sulfate, prednisone) has been used, with mixed results. Ibrutinib, a small molecule drug that binds permanently to Bruton tyrosine kinases (BTKs), which are essential in B-cell development, was not as highly effective as a single drug as some might have thought. Why is this the case? Why would some patients respond but not others? It is in how to most efficiently target this pathway that the biggest knowledge gaps exist.

The identified BCL10 gain-of-function mutations in DLBCL, mostly within ABC-DLBCLs, have been divided into subtypes according to their genomic characteristics, among which BCL10 somatic mutations were most common in BN2/Cluster 1 cases. And it is these transformed marginal zone lymphomas that tend to be sensitive to ibrutinib therapy. However, the data pooled by Dr. Melnick and colleagues show that BCL10 mutations largely affect the caspase activation and recruitment domains (CARD), the MALT1-binding domain, and the C-terminal S/T rich domain. The result of most of these mutations is strong induction of NF-κB activity.

The formation of the amplifier that blasts the tune of NF-κB is the CBM signalosome made up of BCL10, CARD11, and MALT1, all downstream of B-cell–receptor signaling. Nevertheless, how did the BCL10 mutations change how the amplifier functioned? Interestingly, most of the mutations studied showed that the amplifier turned up the NF-κB melody, driving these tumors to stay on. The Melnick lab along with their collaborators show what the mutations do biochemically, which is essentially forming complexes without the need for any upstream activation. The polymers form rapidly, are stable, and wreak havoc. In a series of elegant experiments, the research team showed that BCL10 mutations induce aberrant canonical and noncanonical NF-κB activity through novel and structurally distinct biochemical mechanisms that are at least partially dependent on MALT1. As such, BCL10 mutations should be considered a biomarker for ibrutinib resistance in ABC-DLBCL, so that alternative targeted therapies can be prioritized for these patients.

The research of the Melnick lab has the potential to modify the way ABC-DLBCLs are approached. “We aren’t anywhere near done,” said Dr. Melnick. “You have to understand how mutations work; there are more mutations than we have the capacity to study. This is not something that will happen overnight, but this study illustrates that knowing the genetics can be transformative.” This Plenary Scientific Session is presented by Dr. Min Xia, a Leukemia & Lymphoma Society Fellow and primary author of this abstract, and is available to watch on demand.