It’s a Marathon… and a Sprint? 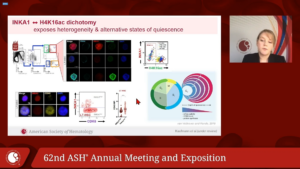 In the running of a marathon, it is always necessary to run the first mile to get to the 23rd. There is no avoiding the hard work of the race to skip to the finish. Nevertheless, without conserving some energy and saving a certain amount of intestinal fortitude while grinding through the middle third, there can never be a drive to the finish. The body and mind will fail. All great marathon runners practice with sprints. All great sprinters practice with distance. This is the only way to finish the race, regardless of distance — with speed, efficiency, and consistent forward momentum.

As it is in running, so it is in hematopoiesis. After hematopoietic stem cell (HSC) transplantation, the focus is always on engraftment, with a significant emphasis (rightly so) on getting a patient through the dangerous period before engraftment occurs — the “sprint” out of the gates and the middle “getting to know you” period soon after it occurs. But what about the final third of the race? The “settling down” period? How much attention do we pay to monitoring the energy reserves necessary for pressing on to the finish, whenever that might be? It is not just engraftment that matters, but sustained engraftment, and the maintenance of the regenerative capacity that makes possible the body’s navigation through countless homeostatic stressors encountered throughout a lifetime. Dr. Kerstin Kaufmann and colleagues have been paying attention to the entire race and may just have uncovered the source of that energy.

She described her findings in her fascinating Plenary Scientific Session abstract “Divergent Levels of CD112 and INKA1 Define a Subset of Human Hematopoietic Stem Cells That Resists Regenerative Stress to Preserve Stemness” (available on demand). Researchers had not previously identified the detailed mechanisms behind the ability to support the competing need for immediate differentiation of HSCs in response to varying conditions and the need to preserve stemness and self-renewal capacity for future differentiation. The existence of short-term and long-term HSCs has been described, since there could of course be no long-term, sustained engraftment without the preservation of self-renewal capacity and varying degrees of quiescence. It was not previously known, however, whether the quiescence fate of HSCs was predetermined or merely a stochastic process based on external triggers. Dr. Kaufmann has determined that even under the significant biological pressure to differentiate during the engraftment period, there is a subset of cells that remain quiescent based on the increased expression of very specific genes.

The competing properties of capacity for self-renewal, multilineage differentiation, and long-term quiescence exist on a spectrum that broadly results in categories of short-term and long-term HSCs. Dr. Kaufmann has identified the actively regulated PAK4/INKA1/SIRT1/H4K16ac axis as a key player in the placement of a given stem cell along this spectrum, with its expression mirrored on the cell surface by the presence of CD112. She found that PAK4 and H4K16ac were upregulated in stem cells even before CDK6 protein upregulation, which is known to be heavily involved in priming HSCs for activation and differentiation, but that INKA1 inhibited all three of these, as well as other genes associated with activation, indicating that INKA1 is vital to the suppression of HSC activation and the preservation of long-term quiescence. Furthermore, it became apparent that the subset of INKA1low expression has coinciding high CD112 surface expression and is capable of exiting the G0 phase rapidly to result in hematopoietic reconstitution. The alternative subset, the long-term HSCs, have CD112low expression and exist in a state of restraint or latency that preserves the ability for self-renewal and regeneration, even in the face of significant physiologic pressure for differentiation.

In essence, the pool of stem cells seems to “know” that although survival now depends on differentiation, it also knows that survival in the future will depend on withholding some of its regenerative potential. The linking of these regulatory processes with surface markers (i.e., CD112) represents a significant step forward in the ability to predict future bone marrow function, as well as a groundbreaking step toward a full understanding of the intricacies of hematopoiesis. Dr. Kaufmann completed her presentation with assurances that this is not a purely academic discovery, but could have significant translational implications in the not-too-distant future. Will CD112 and other identified markers be used to phenotype different types of leukemia cells and predict treatment response?  Can these mechanisms be manipulated to extend latency in mutated cells to avoid the onset of clonal hematopoiesis? Will we alternatively be able to reverse the quiescent fate of HSCs to awaken them and treat age-related immunodeficiencies? Luckily for us, Dr. Kaufmann and her team have already awakened these questions from quiescence and are working on extending the impact of this extraordinary research. And lucky for you, during the 2020 ASH Annual Meeting, everything is recorded, so if you missed the Plenary abstracts, you can now go back and hear the full story yourself.