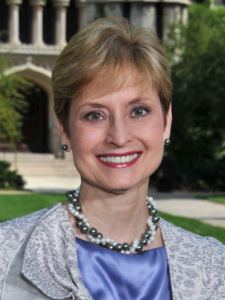 Dr. Le Beau is an Arthur and Marian Edelstein Professor in the Department of Medicine at the University of Chicago and director of the University of Chicago Medicine Comprehensive Cancer Center. She has dedicated her research career to cytogenetic and molecular analysis of hematologic malignancies “for the purpose of risk stratification and the selection of the appropriate therapy.” She has been especially dedicated to identifying recurring chromosomal abnormalities in leukemia and defining the genetic pathways that lead to myelodysplastic syndromes, acute myeloid leukemia, and therapy-related myeloid neoplasms (t-MNs). Dr. Le Beau recalled her decision to study hematology several years ago stating, “It was my good fortune to enter the field of hematology just as [it] exploded with the recognition that cancer was a genetic disease, and that the recurring chromosomal abnormalities represented genetic changes that mediated malignant transformation and defined distinct subtypes of leukemia and lymphoma, and thus could be used for diagnostic and prognostic purposes.” She found cancer cytogenetics intriguing and reveled in figuring out the complex pattern of chromosomal changes in leukemia cells, which she compared to working on a puzzle.

Today, Dr. Le Beau finds that the most significant discovery of her laboratory is possibly the ability to define the molecular mechanism by which deletions of chromosome 5 lead to myeloid leukemias. These findings contributed to the understanding that loss of a single allele, known as haploinsufficiency, of multiple critical genes on chromosome 5 help mediate the adverse phenotype, and alterations in the bone marrow environment synergize with altered hematopoietic cells to give rise to these MNs. Dr. Le Beau acknowledged several exciting breakthroughs in the field such as identifying and reducing risk factors for the development of t-MN, including clonal hematopoiesis of indeterminate potential (CHIP); elucidating the role of the bone marrow microenvironment; understanding that a subset of t-MN patients has germline cancer predisposing mutations; determining the role of CHIP on risk for t-MN and mechanisms of clonal selection; clarifying the role of cytotoxic therapy; defining why t-MN is resistant to therapy and associated with poor prognosis; and developing targeted therapeutics and immunotherapy, among others. She also recognizes several challenges that remain, pinpointing the need for better in vivo models for t-MN, clarification of the role of CHIP on risk, new therapeutic approaches based on biology of disease for t-MN, and potential targeting of the bone marrow niche or employing combination therapy targeting both the hematopoietic stem cells (HSCs) and the niche.

Inspired by her patients and peers, Dr. Le Beau continues to drive the field of hematology forward. “We engage in ‘research’ for the elegance and purity of science and to improve the outcomes for patients, not to ‘search’ for accolades,” she said. However, she finds receiving recognition for her accomplishments to be an honor, especially coming from her peers and the leading organization in hematology. She remembered her mentors and collaborators gratefully. Dr. Janet D. Rowley, her primary mentor, passed along an appreciation of the joy of science, persistence, and resilience, and for the privilege of working in a field with big problems. Collaborators such as Dr. James Vardiman taught her hematopathology and a rigorous approach to clinical diagnostics; Dr. Richard Larson taught her the clinical aspects of leukemia and lymphoma; and Dr. Kevin Shannon shared knowledge on pediatric oncology, analytical thinking, and a rigorous approach to science.

“Hematology is a remarkably privileged profession. An individual has intellectual freedom to pursue virtually unlimited opportunities in clinical practice, research disciplines, education, leadership, biotech, pharma, etc. Much of the research we perform is particularly tractable because of the nature of, and ease of obtaining, blood cells and HSCs; thus, hematologic malignances have been in the vanguard of cancer research in virtually every area,” she concluded. 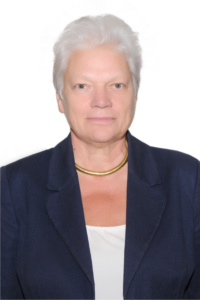 Dr. Cappellini is professor of internal medicine in the Department of Clinical Sciences and Community Health at the University of Milan. Her research has focused on rare hematologic disorders, particularly hemoglobinopathies, that are more prevalent in the Mediterranean and in developing countries. She has strived to better understand the pathophysiology of thalassemias and the complexity of clinical manifestations, with the goal of translating this knowledge into clinical practice to improve diagnosis, treatment, and quality of life for patients. She shared that curiosity has always driven her research, especially for what she called “a fascinating cell such as [the] red blood cell (RBC; erythrocyte).” She added, “It is such an important cell for human beings, and when I started, I was attracted by the pathological implication of such cell in many disorders.” Dr. Cappellini explained that when she started focusing on the hereditary disorders of RBCs, she was quite touched by the idea that thousands of children were affected by these disorders in developing countries with poor outcomes and access to cures. Thus, she decided to establish collaborations with colleagues in India, Southeast Asia, and the Middle East to find a solution.

Dr. Cappellini humbly commented on her accomplishments. “I do not believe I made an extraordinary discovery,” she said. “What I did was a step by step approach.” She explained that when she started her clinical hematology practice, she encountered young adult patients with chronic hereditary anemias — some diagnosed with hemolytic anemia, some with thalassemia intermedia, and some with diserythropoiesis, but all showing inconsistent laboratory data. “I started to look more carefully to the clinical manifestations and realized that there was a lot to learn for better diagnosing and curing those patients,” Dr. Cappellini stated. She observed that coinheritance of hereditary persistence of fetal hemoglobin was an important ameliorating factor for thalassemia and that there was increased risk of thrombosis in thalassemia. She continued working to improve iron chelation and alternative treatments for thalassemia.

Dr. Cappellini is honored to receive this award. “This will be a very emotional event in my life,” she said, remembering the late Professor Sir David Weatherall, and other colleagues at Oxford such as Drs. Bill Wood and Douglas Higgs, who she feels were essential to the development of her career. She also stressed the support of her husband, Professor Gemino Fiorelli, and she notes that hematology continues to drive her desire to conduct life-changing research. “Hematology is a fascinating area of medicine and my advice to any young fellows is to pose questions related to clinical observations and share ideas with seniors, peers, and sometimes even with patients,” she advised those considering entering the field. She emphasized, “Being able to translate basic research to clinical practice is the most rewarding success.”

Join ASH in congratulating Drs. Le Beau and Cappellini, who will be honored in December during the virtual 2020 ASH Annual Meeting.