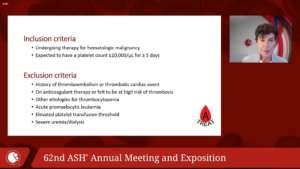 Any physician treating malignancy is acutely aware of the fact that the adverse effects of our treatments can sometimes be as bad as the disease that we are treating. Severe thrombocytopenia is a common complication of treatment for hematologic malignancies and can have devastating consequences. Eight years ago, at an ASH Plenary Scientific session, data from the TOPPS trial were presented demonstrating prophylactic platelet transfusion decreased days of bleeding and increased time to first bleed. However, despite appropriate platelet transfusion therapy, 43 percent of patients in the TOPPS trial still experienced bleeding. Dr. Sherrill Slichter and colleagues, in a study evaluating platelet dose for transfusion, found that  up to 70 percent of patients      experienced World Health Organization (WHO) grade 2 (mild blood loss) or greater bleeding symptoms. Bleeding associated with hematologic malignancies is further complicated by widespread microvascular and endothelial damage secondary to infection, chemotherapy, and graft-versus-host disease. Given this significant morbidity, the American Trial Using Tranexamic Acid (TXA) in Thrombocytopenia (a-TREAT) study sought to evaluate whether bleeding could be decreased by blocking fibrinolysis. In a National Heart, Lung, and Blood Institute–funded, multicenter, randomized placebo controlled, double-blinded trial, they sought to evaluate whether TXA, an antifibrinolytic shown to have efficacy across multiple surgical settings, postpartum and  in the care of patients with bleeding disorders, could decrease bleeding and transfusion requirements in patients at risk for chemotherapy-induced thrombocytopenia. In normal hemostasis, platelets release large amounts of PAI-1, which blocks tissue plasminogen activator’s effect on plasminogen, preventing premature fibrinolysis and stabilizing the clot. Fewer platelets result in less PAI-1 and premature fibrinolysis, so an antifibrinolytic may be effective in this setting. In the second Plenary Scientific Session abstract, “Effects of Tranexamic Acid Prophylaxis on Bleeding Outcomes in Hematologic Malignancy: The a-TREAT Trial,” Dr. Terry B. Gernsheimer presents the notable, though negative, results.

Researchers evaluated 330 adult patients (for 88% power to detect a 30% relative reduction in bleeding) who were undergoing chemotherapy or hematopoietic stem cell transplantation and were anticipated to have hypoproliferative thrombocytopenia, defined as <10,000/μL for at least five days. Exclusion criteria included history of thrombosis, anticoagulant use, acute promyelocytic leukemia diagnosis, other etiology for thrombocytopenia, thrombocytosis, severe uremia, or dialysis. Patients were randomized to TXA or placebo, starting at platelet counts of 30,000/µL or lower, with treatment continuing until platelet count was greater than 30,000/µL or a thrombosis occurred. Platelet transfusions were given for platelet counts of 10,000/µL or less, or at the discretion of the treating physician. Bleeding assessments were performed daily by self-assessment for outpatients and by trained research staff for those who were inpatient. The primary endpoint was proportion of patients with grade 2 or higher bleeding over the 30 days after activation of study drug. Secondary endpoints were number of transfusions and number of days alive without grade 2 or higher bleeding over the 30 days after activation of drug. Safety endpoints were incidence of thrombosis, veno-occlusive disease, and mortality. Medical records were reviewed for adverse events through 30 days post-discontinuation, and patients were contacted at 120 days to assess for thrombotic events.

There was no difference in the primary endpoint  between the TXA- and placebo-treated groups with 45.4 percent and 48.8 percent, respectively, experiencing grade 2 or greater bleeding. There was no difference in the secondary endpoints or in red cell transfusions. Post hoc analysis of higher-grade (3 or 4) bleeding found these events to be rare, and no trend was seen. There were no deaths due to bleeding. There was a statistically significant difference in thrombotic events as those in the TXA group had a higher incidence of central venous line occlusion and tissue plasminogen activator use. However, there was no difference in non–catheter-related thrombotic events or incidence of veno-occlusive disease. Although the study did not demonstrate efficacy in decreasing WHO grade 2 or greater bleeding, the results of this study are informative nonetheless.

These data demonstrate the safety of TXA in this patient population with no excess thrombosis observed, despite most patients presumably having multiple thrombotic risk factors (malignancy, central venous catheters, hospitalization). There may be specific patient populations for whom TXA provides a clinical benefit for bleeding associated with chemotherapy-induced thrombocytopenia. Further studies to identify which patients may benefit would be useful, as would larger studies to further inform safety and efficacy data. However, given the results of a-TREAT, universal TXA treatment of patients with hypoproliferative thrombocytopenia secondary to chemotherapy is not indicated. It is definitely a treat to see studies presented despite negative results!