Your Social Media Guide to #ASH20

If you haven’t been tweeting during the ASH annual meetings of years past, 2020 may be the time to start! Social media is always abuzz during the annual meeting, but in our new socially distant environment, robust online conversation can help us feel close and connected despite not being together in person.

ASH understands that connecting with colleagues is one of the most important reasons that people love attending the ASH annual meeting. While nothing can totally replace the in-person, human connection of a live ASH annual meeting, there are several new opportunities to get involved on social media this year, whether you’re in the mood to share scientific content or feel like posting a photo of your adorable cat absorbing the Plenary from your keyboard!

It’s also worth noting that social media is just one way to rekindle the excitement and anticipation of connecting with old friends and colleagues and meeting new ones. ASH’s virtual meeting platform offers innovative opportunities to connect and network, including the Watch with Friends and Colleagues feature, an ASH Community Collage, the Connect with Participants page, and Hallway Conversations (see sidebar).

To help attendees join in on the conversation, here are some tips and tricks to get you started on social during the all-virtual 62nd ASH Annual Meeting and Exposition.

If the world of Twitter is new to you, look at our “How I Tweet” videos and learn how to make the most of the experience. In this series, Chair of the ASH Committee on Communications Aaron Gerds, MD, MS, discusses some key basics, including:

Hashtags indicate a post’s specific topic and using them can expose your posts to a wider audience. Even if someone doesn’t follow you, they can still find your post if they search the hashtag you used.

The official annual meeting hashtag is #ASH20. Adding at least this hashtag to your posts helps to ensure your message doesn’t get lost in the shuffle.

There are also a wide variety of disease-specific hashtags, which are defined in the image below. 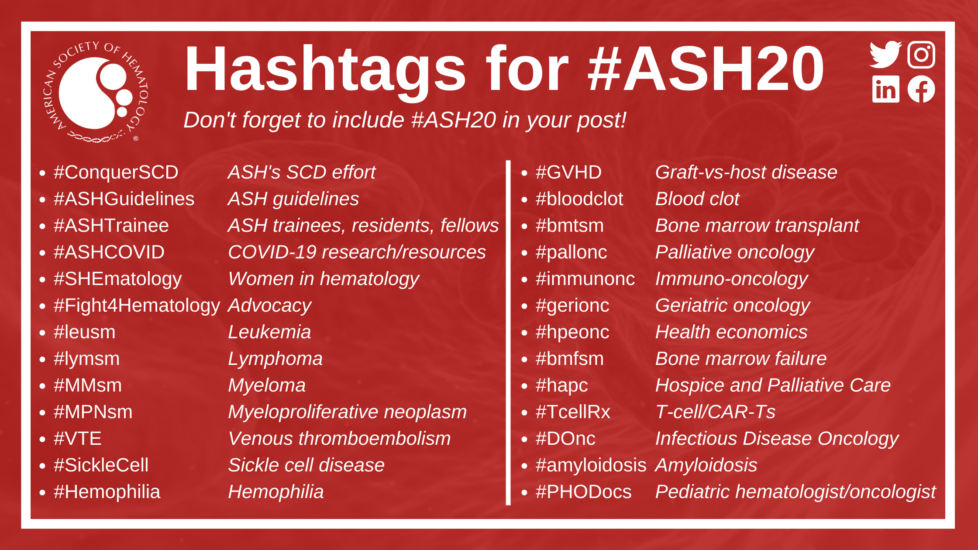 We are also highlighting six hashtags on the virtual annual meeting platform that will be featured in the ASH Community Collage, along with prompts to help you join in on conversations from wherever you’re logging on to the meeting. If you create posts using these hashtags, you may catch your tweet or post on the ASH Community Collage, similar to the social media wall at the in-person meeting! 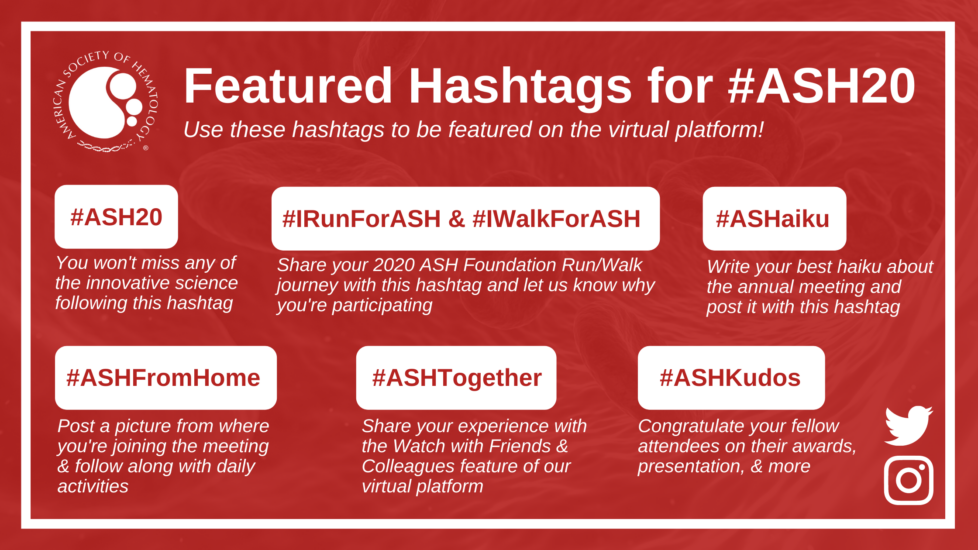 #IRunForASH & #IWalkForASH
Participating in the 2020 ASH Foundation Run/Walk? Post photos of you and your team logging your miles! Initiate a friendly step challenge, and share a screenshot of your steps taken.

#ASHaiku
An ASH News Daily Twitter tradition returns! Post a haiku about the meeting and tag it with this hashtag. Originating in Japan, haikus are poems consisting of three lines of five, seven, and five syllables. Some of the cleverest #ASHaiku tweets are featured in ASH News Daily throughout the meeting!

#ASHTogether
Planning to use our Watch with Friends and Colleagues feature to take in annual meeting content with your colleagues? Post a video or picture and add the #ASHTogether hashtag. But don’t stop there — make it unique. Make it an action shot, don silly hats, and show us what makes your team special!

#ASHKudos
The ASH annual meeting gives us an opportunity to recognize those who make hematology great. Use this hashtag to give public kudos to your colleagues, a great presenter, or a mentor/mentee. Consider also recognizing someone who received an ASH Honorific award (see recipients here). We’re doing our best to recognize them in our virtual meeting this year and hope to have thousands of kudos so that we can replicate the experience of being honored on the big stage!

#ASHFromHome
Post a picture from where you’re joining the meeting! Do you have “coworkers” (pets, children, roommates) helping you make the most of your ASH virtual meeting experience? Do you have a cool coffee mug? Post a photo! Believe you have the comfiest chair in the ASH universe? Post it! Cleanest office, most thriving plant, best view? Post it! And keep an eye on the #ASHFromHome hashtag, because ASH will be posting daily photo or video challenges.

Here at ASH, we like to recognize those who take their social media presence to the next level and give you some great new accounts to follow! For this year’s annual meeting, we have put together a list of the most prolific Tweeters from last year’s meeting that you can consider following to enhance your annual meeting experience. This list is made up of the most active users of #ASH19 (last year’s meeting’s hashtag) who included their Twitter handle when they registered early for this year’s meeting, with a cutoff of November 5. The views expressed by the following list of Twitter users do not represent the views of ASH.

During last year’s annual meeting, more than 47,000 tweets were posted using the official meeting hashtag. With so much to talk (or tweet) about, you will find many conversations in your area of expertise.

By sharpening your hashtag skills and practicing some of the “How I Tweet” basics, you’ll be primed and ready to add your voice into the mix. We can’t wait to share some of our favorite posts!

Networking at the All-Virtual #ASH20

The virtual meeting format provides several options for connecting with friends and colleagues. The platform opens on December 2, and attendees are encouraged to log in during a Preview Day and get familiar with the tool and features.

Find your friends and colleagues who are also attending the meeting to engage in a direct instant message chat. You can also set up a virtual one-on-one video chat, or organize a group discussion for as many as to 50 people. The Connect with Participants feature can also use artificial intelligence matchmaking to help you find attendees whom you may want to network with.

Some of the best impromptu conversations happen in the hallways between sessions during an in-person meeting. This year you can participate in casual discussion board–style conversations with large groups of attendees by visiting the Hallway Conversations page. There will be pre-set topics available for attendees to engage on a variety of scientific and nonscientific topics. Don’t see a topic that interests you? You’ll also have the ability to start your own conversations.

Watch with Friends and Colleagues

A feature unique to the ASH meeting is the ability to watch sessions with other attendees. Invite your mentees, collaborators, or friends to watch together so you can share your thoughts in real time!